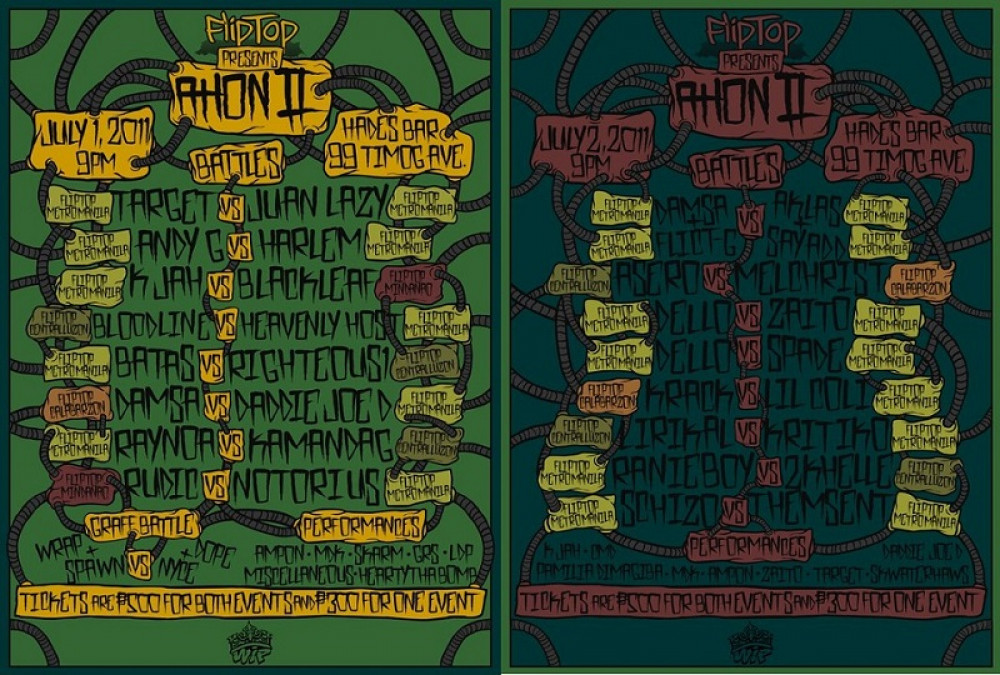 It was the first ever FlipTop event that I’ve seen live. I’ve always wanted to attend ever since I saw the Grain Assault battles on YouTube, but I just never had the time. So when 2011 came, I promised myself to check out at least one event. I saved up for it and kept on checking the league’s Facebook page for updates. It was around early June when the FlipTop staff released the official poster for Ahon 2. This was the league’s first two-day affair, and the lineup of matches was enough for me to go. I immediately browsed through my calendar and was delighted to see that I wasn’t doing anything on the 1st and 2nd of July.

Ahon 2 took place in this warehouse somewhere in Timog. Some might think it was a bizarre choice, but I and my two friends loved the grittiness. The atmosphere was perfect for an event featuring hard-hitting rap battles. Upon entering, the sight of the mini-stage already put a huge smile on my face. I remember telling myself that I’m going to be part of Pinoy hip-hop history. Day 1 of the second Ahon was about to begin, and we were ready!

Eight battles took place on the first day, but I’ve decided to just talk about my personal favorites (I’ll do the same for day 2). Up to now, I’m still wondering why Damsa vs. Daddie Joe D remains underrated. The battle was a perfect mixture of comedy and serious lines as well as rap ability. You could sense it in their delivery that there was a bit of animosity between them. Good thing they let bygones be bygones afterward. Bloodline (Nico and Tomahawk) vs. Heavenly Host (Apoc and Dhictah) was a classic 2-on-2 clash. Both teams had chemistry, and they were able to showcase their individual styles. I do believe that Heavenly Host’s performance here influenced most of the participants of the Dos Por Dos tournaments.

I’ve been a fan of Target ever since his match with Dello, so I was certainly looking forward to what he had in store here. Lucky for me, he didn’t disappoint! Target was more aggressive in his delivery, and his lyricism was deeper and more relentless. He proved that he’s more than just a comedic emcee. It wasn’t an easy win for him though. Juan Lazy went in with his always-impressive multis and brand of humor. His stage presence was also strong, but it didn’t match his opponent’s intensity. Another Day 1 highlight for me was Batas vs. Righteous One. Batas was the clear winner no doubt, but props to Righteous One for remaining consistent and confident all throughout. They both dropped some of their hardest as well as funniest bars to date.

Day 1 of Ahon 2 was a huge success! When I woke up around 11 AM on the 2nd of July, all I thought about was the second leg of the event. We came to the venue earlier just so we could be on the front row. Finally, after a few hours of waiting, Anygma and Kuya Kevs went on stage, and history was made once again. Dello had two battles, both were against credible opponents. His debut performance at Second Sight amazed me, but he was just on another level here. He was more comfortable on stage, and his battling style was more balanced. Of course, who could forget his back-to-back rebuttals?  Dello’s impromptu lines alone were enough to get him the W. I have to give credit to Zaito and Spade too. Zaito still managed to entertain the crowd with his clever jokes while Spade’s hardcore rhymes stayed brutal and effective until the final round. The main event featured another 2-on-2 match. Damsa and Flict-G teamed up to take on Sayadd and Aklas. Even without beef, the two teams managed to make it look heated from beginning to end. Damsa and Flict-G enthralled us with their flow and delivery while Sayadd and Aklas raised hell with their aggression and in-your-face bars. I swear I was literally in awe while watching these four lyricists spit fire.

What made Ahon 2 even more special was that it also introduced me to the art of graffiti and hip-hop music. The graff battles were as mesmerizing as the verbal wars. Each artist was in the zone as they created their street masterpieces. It was at that moment where I realized that it’s more than just random spraying. The musical performances were dope, but the sets of Pamila Dimagiba and Miscellaneous were the ones that really stood out to me. Their chemistry and raw energy combined with their compelling sound quickly made us bob our heads and sing along.

Since then, I became a bigger fan of battle rap and hip-hop culture. I checked out more and more events and gained knowledge along the way.  Without a doubt, you will be seeing me again on Ahon 10 in December. There’s no word yet on the official date. We’ll just have to wait for the announcement. If you’re still thinking about watching live, let me be the first to say that it’s totally worth it. Much respect to the entire FlipTop team for bringing local hip-hop to a wider audience for nine years. I’m looking forward to another decade!