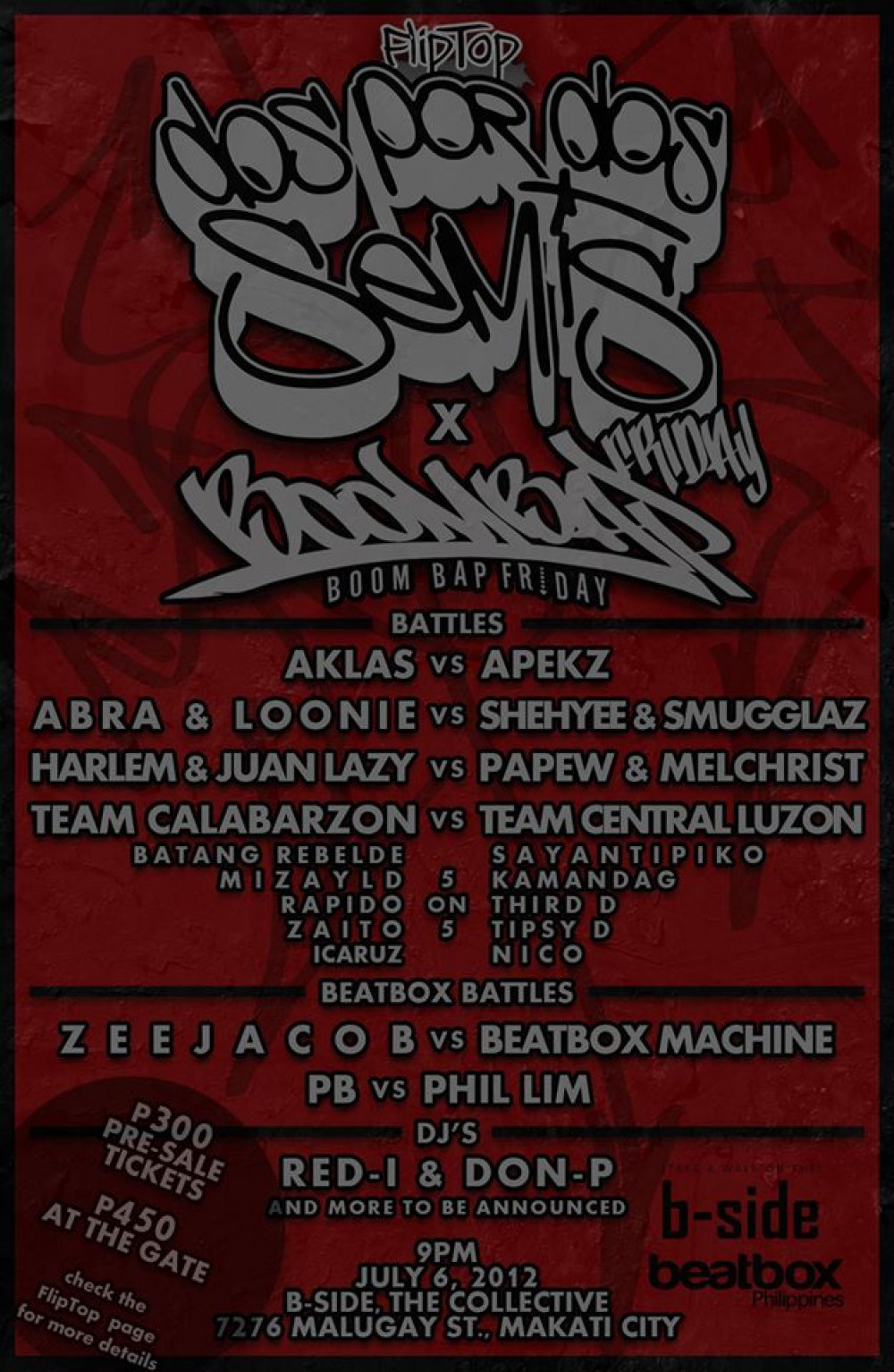 There were still doubters, but once again, FlipTop proved them all wrong. 2012 is often regarded as one of the most successful years for the company. It began with a potluck barbecue on the 4th of February at the Graffiti Wall of Intramuros. There were no battles or performances, just emcees and fans interacting over food, drinks, and hip-hop music. Hopefully, this will happen again in the future.

The action officially started on February 25 with the third edition of Grain Assault. It was held at the Feron Building near Quantum Café, and apart from the 1-on-1 matchups, it also featured the first round battles of the inaugural Dos Por Dos. For those who aren’t familiar, it’s a 2-on-2 tournament featuring some of the best veterans and up-and-comers in the league. The 2012 Dos Por Dos Tournament immediately became the highlight of the year, all thanks to the participants who gave their one hundred percent. We witnessed heated battles, underrated rappers finally getting recognition, and top-tier emcees cementing their legacy. It was the team of Shehyee and Smugglaz who won the championship on the 31st of August at B-Side. They brought their A-game in every round, but it was at the semi-finals on July 6 where they really shined. The duo took on Loonie and Abra in what is now regarded as one of the greatest and most viewed matches in FlipTop history. Without a doubt, the battle was an exhibition of proper teamwork and top-notch lyricism.

Ahon, which is now on its fourth chapter, took place on the 9th, 10th, and 11th of November. The first two days were strictly for battles, and it consisted of emcees from all divisions. The venue wasn’t packed as compared to previous events, but those who attended were treated to unpredictable and exciting verbal wars. The third day was all musical performances with legendary Fil-am rapper Bambu headlining. Bambu wowed the audience with his energetic stage presence and songs that stay relevant up to now. The other performers on the lineup also tore the house down. Hip-hop music was certainly alive and kicking that night.

FlipTop continued its expansion outside of Metro Manila this year. 2012 saw the official birth of the Visayas Division. The inaugural event was called Dagitay, and it happened on the 28th of July in Dumaguete. Emcees such as Tweng, EJO, and Fongger made their debut here. Another first was the Aspakan event (October 6) in Pampanga. Fans saw the overall evolution of emcees from both Central Luzon and Metro Manila. The Mindanao Division enjoyed three days (May 17, 18, and 19) of pure Philippine hip-hop. Day 1 and 2 were Mindfields, which featured awesome performances from emcees and crews around the country. Day 3 was the second edition of Different Ways. It didn’t have tournament battles, but it still produced some memorable matches. Other great events outside of Metro Manila include Hukuman in Bataan (March 17) and Kataga in Cavite (September 8).

Nine years later, the league is still standing tall. Even a global pandemic is not enough to hinder its growth. Expect more and more unforgettable moments once things go back to normal. We hope to see you on the next live event!