FlipTop 2010: Where It All Started 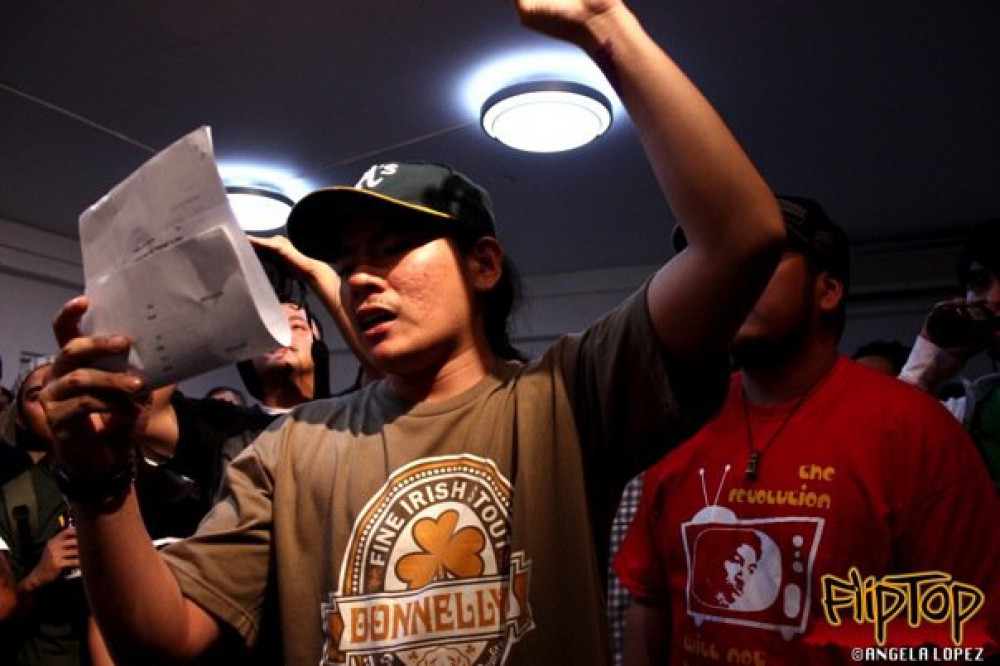 It all started with a dream: to put up an organization dedicated to the preservation and promotion of Philippine hip-hop. Anygma, who was an emcee of indie label AMPON at the time, made sure that this goal would be achieved. He was a few months away from graduating college, but his top priority was this project. Finally, when 2010 came, FlipTop Kru Inc. was born. The company’s first product is FlipTop Battle League, which was inspired by the format of its international counterparts such as the World Rap Championships, Ultimate Rap League, and GrindTime.

On the 6th of February of the same year, the company held its very first event called Grain Assault. Anygma recruited DJ UMPH of The Mighty Miscellaneous to be the cameraman for the night as well as the video editor of the battles. When it came to funds, the founder had to borrow a few bucks from a friend. There were no sponsors, but the event still pushed through.

Grain Assault was a mild success, and it was enough for FlipTop to hold another event called Second Sight. It took place on the 20th of March at B-Side, which was also just starting out. Like its predecessor, Second Sight’s attendance was decent, and everyone thoroughly enjoyed the battles. Things are going smooth so far for FlipTop, but everything changed when the matches from the two events made their way to YouTube. What started out as an underground league is now getting over a hundred thousand views. Thanks to the intro songs of the emcees, more and more people are also showing genuine interest in Pinoy hip-hop music. The phenomenal rise of the league inspired Anygma and DJ UMPH to keep going. To celebrate its success, they’ve decided to organize the event known as Ahon on the 15th of May. It happened at the now-defunct Guerilla Radio in Pasig, and compared to Grain Assault and Second Sight, this one was PACKED. Despite the scorching heat in the venue, the crowd stayed to witness some of the country’s elite lyricists in action. The majority of the Ahon battles gained over a million views upon uploading, and from there, the ascent of the league and Pinoy hip-hop as a whole remained intact.

FlipTop continued to organize successful battle events in and out of Metro Manila throughout the year. There was Bwelta Balentong, Down N South, Gapo De Gulat, Sabong Sumulong, and Tectonics. The latter featured Anygma vs. GrindTime’s Dirtbag Dan, which served as the first international battle in the league. Another highlight was the inaugural tryouts event or better known as Process of Illumination on the 25th of June. It paved the way to some of FlipTop’s biggest names today such as BLKD, Spade, Aklas, and Sayadd. FlipTop also organized a hip-hop night every Tuesday at Freedom Bar (the same venue as Bwelta Balentong and Process of Illumination) where local artists can showcase their music. While it was short-lived, it still introduced the genre to a wider audience and created new affiliations between emcees.

2010 was indeed full of highs, but sadly, there was also a low point. On March 27, Miguel Agoncillo or DJ Lamok lost his life in a car accident. He was one of the turntablists at FlipTop’s first two events and was also a part of the AMPON collective with Anygma. Apart from DJing, DJ Lamok was also an emcee who helped pioneer Nerdcore hip-hop in the Philippines. The original plan for Second Sight was for him to battle Abra, but unforeseen circumstances led to its cancellation. Rest in peace, DJ Lamok! The league and its fans will always remember you.