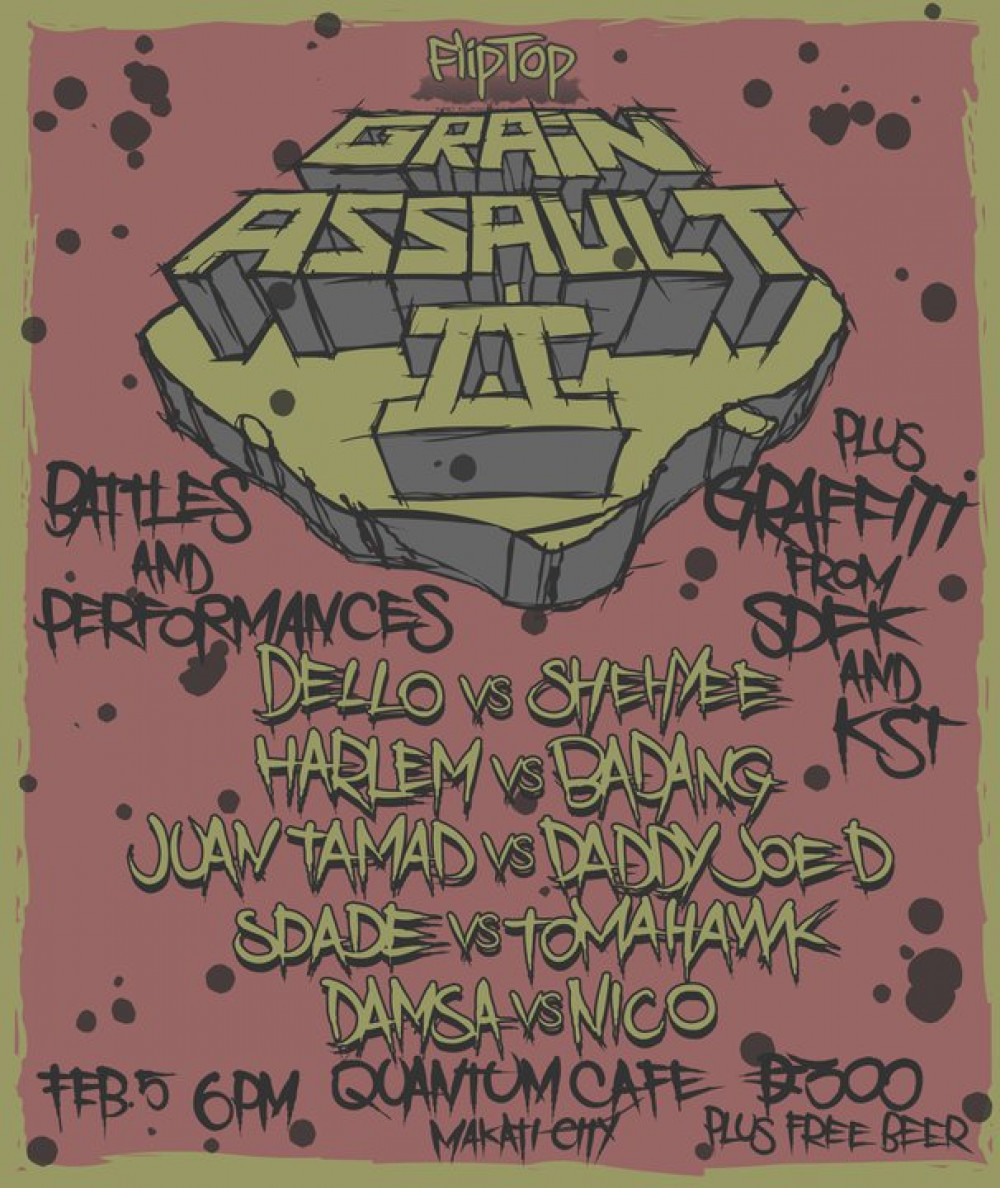 One year later, FlipTop is still making waves in the Philippines. They started 2011 with Grain Assault 2, a celebration of the league’s one-year anniversary. It was held on the 5th of February at Quantum Café, the same venue as FlipTop’s inaugural event. There were only 5 battles, but each one still managed to make everyone in the venue go wild. Dello vs. Shehyee has the most views online, 6.4 million to be exact, and it’s much-deserved since it was a classic style clash.

Apart from the 5 matchups, Grain Assault II will also be remembered for its awesome performances and graffiti exhibition outside of the venue. Fans witnessed some of the top local emcees and groups such as Dello, Aklas, MDK, People’s Future, Heavenly Host, Lil Sisa, Batas, Target, and The Mighty Miscellaneous perform on stage. SDFK and KST, two highly respected crews, blessed the canvass with their awe-inspiring street art. Hip-hop was definitely well-represented that night.

2011 was also an epic year for the English Conference. On April 9, there was the Silat event in which FlipTop emcees took on rappers from Evil Poets Society, a league based in Malaysia. Only one Pinoy battler lost that night, but the rest dominated. Unfortunately, the audio didn’t turn out too well live and on YouTube because of another event in the same venue, which was organized last minute. Nevertheless, it was great seeing the underrated conference get the spotlight. Ahon is already considered as the biggest event, and with FlipTop’s continuous success, Anygma and co decided to organize two of them in 2011. Ahon 2 was on the 1st and 2nd of July in Quezon City while the third was on the 10th of December in San Juan. Both were packed, and many battle of the year contenders were produced. The musical performances, as with all of the events in 2011, left the audience enthralled as well. FlipTop also held the first Zoning on October 22 at Quantum Café and organized classic battles at the Vuclip Event (July 21 in Makati), Batas’ “Ako” Music Video Launch (August 20 in Paranaque), and Dutdutan (August 27 in Pasay).

Metro Manila wasn’t the only one that witnessed the greatness of the league and Pinoy hip-hop as a whole. 2011 saw the official formation of the Mindanao Division. Two events were held in Davao, namely Different Ways (May 28) and 082 Magnitude (September 24). The emcees not only represented their hometowns, but they also showcased their undeniable skills. The Calabarzon Division stepped up too, thanks to the exciting Bara Ko, Barako event on December 17 in Naic, Cavite. On the 28TH of December, the league went to Ilocos Norte for its final event of the year. Five battles took place, and while they remain below 1 million views, they still showed the evolution of lyricism in battle rap. Indeed, this was just the beginning of FlipTop’s expansion!

Ten years have passed and the league remains to be a staple in Philippine hip-hop. Not even a global pandemic can stop the movement from growing. Hopefully, things will improve next year so we could finally go back to live events.   Stay safe for now and keep on supporting FlipTop and the local scene!